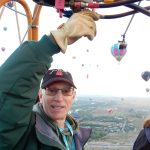 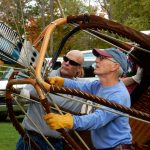 Sky Adventures was born in Rochester, Michigan over 47 years ago after Dennis earned his commercial balloon pilot license. Dennis has accumulated OVER 3,600 hours piloting balloons and has taken over 10,000 passengers for rides since 1975. Sky Adventures moved to Oxford in 1995 where Dennis lives with his wife, Linda, and their beloved dogs. When not ballooning, Dennis can be found in his flower gardens hybridizing daylilies, which began as a small hobby that has now grown out of control. 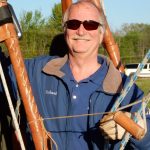 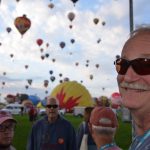 Richard discovered ballooning when a Sky Adventures balloon, piloted by our own DJ Ostrand, landed in his yard. After helping pack up that balloon, Richard, his wife, Sandy, and their kids became members of the chase crew. After a few years of being our best chase crew member, Richard started pilot training and earned his commercial pilot license in 1993. He has accumulated over 1000 flights and has taken over 3,500 passengers over the last 28 years. Richard and Sandy’s daughter, Amanda, is one of our loyal chase crew ever since her birth 27 years ago. Her husband, Josh, has also gotten the bug and is a great addition to the team. 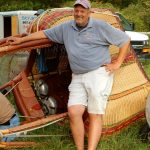 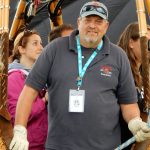 Dave began chasing and learning to pilot balloons over 20 years ago and thoroughly loves all aspects of the sport of ballooning. In 2011, he earned his commercial license and became Sky Adventures newest pilot. Dave works as a manufacturing engineer for a local automotive supplier and can fashion anything out of metal, which is a huge asset for Sky Adventures. Dave’s  daughter Kristina, who along with her husband Satyam, are a valuable part of the Sky Adventures chase crew. 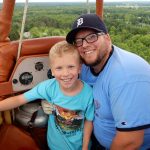 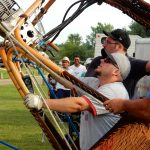 Andrew has been involved in ballooning since he was 10 years old. He began his Sky Adventures career as a chase crew member for his uncle, Richard. Andrew began his pilot training and after many years of hard work, he earned his commercial pilot’s license in 2013. Andrew is employed as a manager of a Panara Bread restaurant in Sterling Heights. Andrew and his wife, Danielle, are the proud parents to Landon, Allison and Camden. Landon is now old enough to be a junior chaser and is a valuable member of the team. A talented photographer and videographer, Andrew frequently contracts with passengers for custom videos of their “sky adventures”. 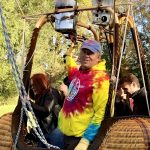 Jeff became Sky Adventures newest commercial pilot in 2019, after beginning his training in 2010. He has logged nearly 200 flights and is a great addition to our commercial pilot family. By day, he is a self employed master wood floor installer and a jack of all trades. His vast talents are continually utilized by Sky Adventures. Together with his wife Joanna, a nurse midwife, they have 3 sons, Ryan, and the twins Hunter and Barrett. Jeff and his family are huge winter enthusiasts, spending much time at their cabin in the upper peninsula snowmobiling and enjoying the snow seasons. Jeff has many hobbies which include hunting and fishing with the boys. The family also consists of their two beloved Llewellin Setters, Oakley and Ranger. 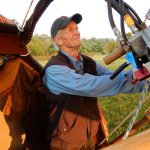 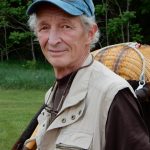 DJ started his ballooning career in 1977 after taking his first flight with Sky Adventures. Soon thereafter, he started pilot training and earned his commercial license in 1981. He has accumulated over 2,300 flights and taken over 10,000 passengers over the years. DJ has been a finish carpenter for over 40 years and now works with his wife, Diana, in their custom framing shop, ‘Accent on Art’ in Lake Orion. Diana has also been an important member of our chase crew for over 30 years.